What is Bio Fuel ? Part 2 – The research

What is Bio Fuel ? Part 2 – The research

For the production of new bio-liquid compatible equipment such as boilers, burners and oil tanks, as well as the conversion of existing installations and equipment, it is vitally important and necessary that the properties of the fuel to be combusted are not only known but are consistent in supply.

To establish this, a bio-liquid fuel project was undertaken by OFTEC and its members in partnership with Carbon Connections, University of East Angia, ICOM Energy Association and Clean Energy Consultancy. The project involved extensive research including live trials held at various domestic and comercial sites, all of which were closely monitored and the equipment analysed over a 12 month period. In short, no problems were encountered and the results obtained proved positive in confirming that a mixture of FAME and kerosene or FAME and gas oil can be successfully used as a replacement fuel to reduce carbon emissions.

A number of different bio-liquids blends were tested, with B30K (30% FAME and 70% kerosene) chosen to be the most favourable blend used amongst domestic oil users. This is predominately due to the ease in which existing equipment can be successfully converted and it’s convenience given that the majority of flue systems are low level discharge.

Should I fit An Oil Tank Alarm ?

How to replace a broken handwheel on a TankMaster 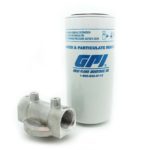 Which Oil Tank Gauge is Best?

What is Bio Fuel ? Part 4 Storage and Supply

How to replace a broken handwheel on a TankMaster

What is a Fire Valve?

Which Oil Tank Gauge is Best?

Water in Your Heating Oil Tank

Prepare for the Cold – Winter Essentials

‘How to’ change the Tankmaster body without draining your tank

You can find out more about which cookies we are using or switch them off in settings.

This website uses cookies so that we can provide you with the best user experience possible. Cookie information is stored in your browser and performs functions such as recognising you when you return to our website and helping our team to understand which sections of the website you find most interesting and useful.

Strictly Necessary Cookie should be enabled at all times so that we can save your preferences for cookie settings.

If you disable this cookie, we will not be able to save your preferences. This means that every time you visit this website you will need to enable or disable cookies again.

This website uses Google Analytics to collect anonymous information such as the number of visitors to the site, and the most popular pages. We also use ZenDesk as our which includes cookies to store the information you send to us during enquiries.

Please enable Strictly Necessary Cookies first so that we can save your preferences!